Mt. Holly was opened in 1955 for a short season. Over that summer, they had tested the capacity of the aquifer to support snowmaking and opened that winter with a trailer for a lodge, a rope tow or two and a parking lot. The ski patrol was formed that winter. Over the next spring, summer and fall, they built a real lodge with rental equipment, a cafeteria and restaurant, a bar and a ski shop. The ski shop was reportedly operated by Don Thomas. Snowmaking was increased and I think they added a rope or two, or may even have installed a t-bar.

The Lansing State Journal on June 8, 1956, on page 35,in an article datelined Roscommon, June 8 (UP), said that Morton Graddis of Bloomfield Hills received tentative approval to construct skiing facilities in the Holly Recreation Area including ski tows and snow making equipment. On October 30, 1956, the Battle Creek Enquirer listed the Mt. Holly Ski Club as a new ski area for the 1956 season. The Grand Opening of the lodge in 1956 is used by the area as their official date of opening. Mt. Holly later added the first chairlift in southeastern Michigan (a used, wooden-seated double that now provides the seats in the booths in the “Lift Lounge.” They continued to add vertical, lifts, and snowmaking.

The next earliest newspaper mention of Mt. Holly I have found is in The Cass City Chronicle for Friday, Nov. 9, 1956 in the “Michigan Mirror” column. It lists Holly, near Bloomfield Hills (sic) among the rapidly developing ski areas of Michigan.

Here is a picture of an early Mt. Holly ski patch sent to us by David Whitehall who sells vintage patches (and other memorabilia) on E-bay as The Vintage Argonaut: 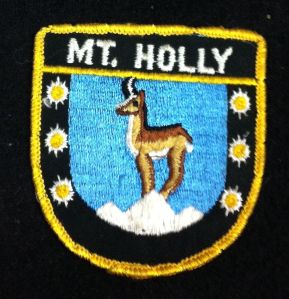 On Dec. 24, 1959, The Luddington Daily News printed a ski report which listed Mt. Holly as having a 6″ base with 3 slopes open. On Dec. 10, 1970, The Cass City Chronicle published the AAA Michigan Winter Sports Fun List which had Mt. Holly with 7 slopes, 4 chairlifts, a T-bar, 8 rope tows, snowmaking and night skiing.

They eventually added the first (and still only) high speed quad in southeastern Michigan. They now operate with seven chairs, 5 ropes, and 2 conveyor (magic carpet) lifts and have been open continuously for 56 seasons.

Mt. Holly, like a couple other southeast Michigan ski lodges, played a small part in the history of Rock ‘n’ Roll in the Detroit area. On this site, you will see pictures and references to performances in the Mt. Holly lodge by some of Rock’s most famous acts. Here’s a link to a list of a few of the concert dates at Mt. Holly in 1966 and 1970. Here’s another link to vintage pictures of the ski area posted by the ski area on their web site.

In 2012, Joseph F. Kosik, owner of Mt. Holly, Pine Knob, Bittersweet, and ski areas in Wisconsin, was inducted into the Michigan Ski Hall of Fame.