Where was this area? It turns out that Fonro was about 20 mi. north of Mio, 1 1/2 mi. east of M-33 near Comins.   On Jan. 4, 1968, The Cass City Chronicle noted in the AAA Guide to Winter Sports Fun in Michigan that Fonro had 5 slopes and 3 tows. According to the 1971 AAA Winter Sports Fun List published in the same paper on Dec. 10, 1970, Fonro had 7 slopes and 3 rope tows.  of Dec. 24, 1969 noted on Page 5 that Fonro operated one of the largest snowmobile rental businesses in the state. The Evening Independent from St. Petersburg, FL, on 11/17/70 in an article on page 9B titled “Michigan Offers Winter Fun” noted that Fonro had added snowmobile trails.

Jim Jacques sent along this picture of the Fonro Ski Lodge from 1964. Apparently it was a top-of-hill lodge, not uncommon in central Michigan, and had an octogonal seating area with a central fireplace resembling a teepee. 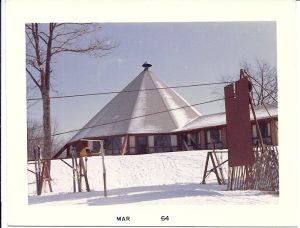 A patroller I used to ski with at Mt. Maria once related his experience visiting Fonro to help train the ski patrol there. He said it was a luxurious area for people from the Detroit area. Families arrived in large black sedans or limos. The kids went skiing, the wives went to the bar, and the men, wearing dark business suits, disappeared into the back room. He thought it looked like an underworld retreat. I am unable to spot this former area on the satellite map. If you know the exact location, please let me know.

If you have any information about skiing at Fonro, please post it or send it according tot he directions on the About MILSAP page.