Sports Illustrated reported in 1958 that this area had 7 miles of trails and 9 rope tows. Two rope tows and 2 slopes were new for 1958. They note that the previous season, the Manistee Ski Area was open 45 weekend days and had 11,500 patrons. They did not note an address for the area.

Teachski.com shows a postcard for the Manistee Ski Area. It depicts a base lodge and skiers riding a surface lift, apparently a Poma (platter) lift.

The note on the back of the postcard places the area off M-55 16 mi east of Manistee in the Manistee National Forest in the Udell Hills:

SKIING IN MICHIGAN  The Manistee Ski Area in the Manistee National Forest offers some of the finest skiing in the Mid-West.  Located 16 miles East of the city of Mainstee, off highway M-55.  The lounge, restaurant, ski shop and rental equipment are located in the $50,000 Ski lodge 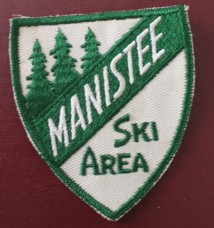 Teachski.com shows another postcard with a picture of the same base lodge. They identify the image on their library as Udell Hills. Was the Udell Hills area the same as the Manistee Ski Area? How about the Big M Ski Area?

Ed Kobak sent us pictures of the following brochure for Manistee Ski Area: 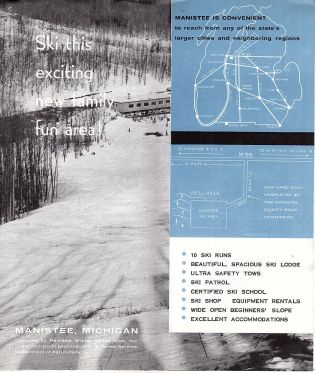