The Battle Creek Enquirer on December 30, 1956 lists Brady’s Hills as one of 4 new ski areas in western lower Michigan. On Feb. 10, 1961, The Ludington Daily News snow report said Brady’s Hills would re-open on Saturday with new snow. In the 1971 AAA Michigan “Winter Sports Fun List”, published in The Cass City Chronicle on Dec. 10, 1970, Brady’s Hills, is said to be off M-46 and it had 10 slopes, a Poma lift, 6 rope tows, night skiing and snowmaking. The 1968 guide, from the same newspaper, printed on Jan. 4, 1968 said the area was off M-46 between Amble and Lakeview and had 10 slopes, electric rope tows and snowmaking, no mention of the Poma which must have been installed in 1969 or 1970. Even earlier, the 1966 Guide listed Brady’s with just 9 ski runs, but said they had electric rope tows and snowmaking. Lakeview is between Grand Rapids and Big Rapids, about 6 mi. east of US-131.

In a post below, Jennifer Knappen says Brady’s Hills was opened by her grandparents in the winter of 1956. The area was named for her great grandfather, Brede Paulson who had owned the land before them.

Brady’s Hills has a Facebook page. Renee says she thinks it closed between ’82 and ’86 while she was in high school. It is now open for horseback riding and the old lodge with its beautiful fireplace has been converted into a private residence.

Brady, in a comment below says it closed after the 82-83 season and that the former access road off M-46 is now a plowed field. The s

atellite shows what may be ski slope scars on the west slope of a hill about 1 mi. south of M-46. Bob, in another post below suggests that Brady’s
Hills may have been know under another name, Winterskol,  around 1980. From other posts, the name seems to have changed around 1976 and reverted back to Brady’s Hills around 1982. 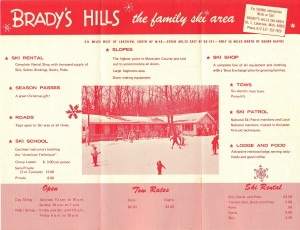 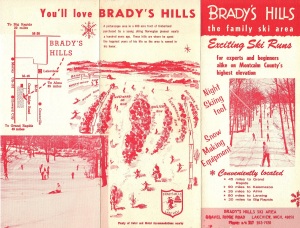 If you have any information about skiing at Brady’s Hills, Please post it here or send it to us via the directions on the About MILSAP page.