On Sun., Dec. 23, 1951, the Toledo Blade printed an article about winter sports conditions in Michigan which said that conditions at all the favorite ski areas of northern Michigan…report excellent skiing, perfect weather and ideal conditions with plenty of snow. The list included Echo Valley.

A month later, on Fri., Jan. 25, 1952, The Ludington Daily News winter sports report listed Echo Valley, near Kalamazoo, as having perfect conditions for skiing, skating, and tobogganing, but no tows operating. I do not know if this means their tows were not running or they were an X-C only area with no tows. On Jan. 4 1968, The Cass City Chronicle printed the “1968 AAA Michigan Guide to Winter Sports Fun,” which listed Echo Valley as having 8 toboggan runs, rope tow, toboggans furnished free, night tobogganing, skating and snow making. (Note, no mention of skiing or jumping.)

Echo Valley is apparently still operating (they closed for the season on the first weekend of March, 2011) for tubing, tobogganing, and ice skating. If I interpret their site correctly, they have been operating since 1937. An email query to the area elicited a response from Melody that Echo Valley never had skiing, but did have a ski jump at some time in the past. Apparently more than one; a follow-up inquiry produced the response that jumping started there 65 or 70 years ago (not long after 1937?) and that the last jump was removed in about 2003 (although I suspect it was not used for the last few years it was up.)

An all-season sliding surface called Everslide has been installed on each run. Runs are a quarter-mile long and you’ll reach speeds of up to 60 MPH. The staff will return your sled to the top via an overhead lift. Apparently, you have to walk back up, although they do have a rope tow for the tubing hill which also has snowmaking.

Echo Valley is due east of and abuts the Robert Morris Park, which occupies land which used to be Fry’s Landing and Fry’s Winter Sports Park, which is listed as having skiing and a tow.

Bob Sisco took his grandsons to Echo Valley on January 16, 2016, and sent us the following pictures and information. They were open for tubing and tobogganing, but the skating rink was not available. They have a walding rope tow to help tubers (and tobogganers?) get back up the hill. They have a great lodge with many artificts, pictures and newspaper clippings about the history of the area on the walls. Thanks Bob, we look forward to more information about the history of this fascinating area. 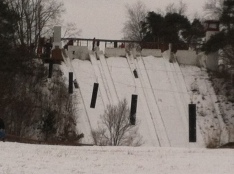 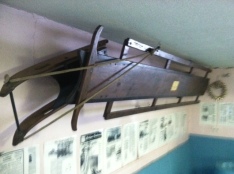 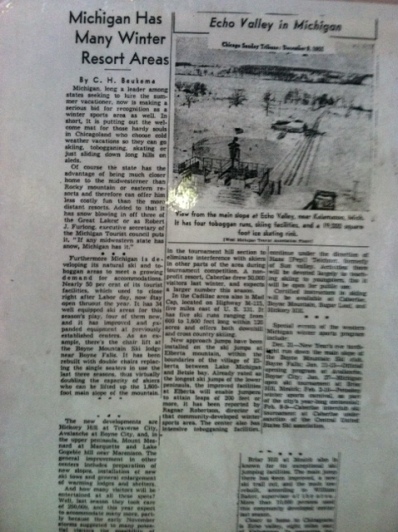 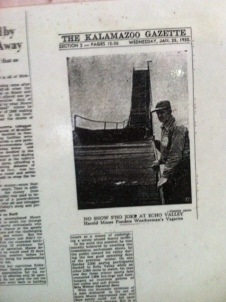 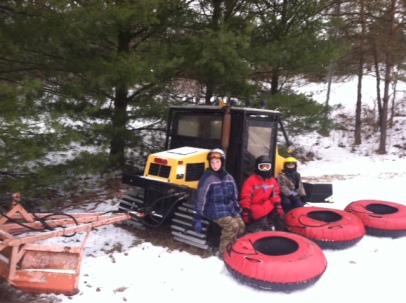 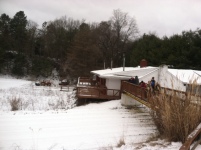 If you have any information about ski jumping or lift-served skiing at Echo Valley, please post it or send it using the directions on the About MILSAP page.