The Grayling Winter Sports Park opened in 1929 after the fundraising efforts of Clarence Johnson and other area businessmen. For years, it was a popular destination for ski touring, schussing, and tobogganing. People came by the hundreds on ski trains and rode flat bed trucks from the station to the ski area.

Due to generous support of the federal park service, state conservation department, and Civilian Conservations Corps, Grayling offers today the finest public toboggan set-up in the entire United States, and this isn’t paid ballyhoo. Six steel slides are the only ones of their kind anywhere not excluding Lake Placid or Sun Valley. Two ski tows have been in operation; next season there will be three.

In 1934, according to the history on the Hanson Hills, website, they constructed a 66′ ski jump. On Mar. 14, 1941, The Cass City Chronicle in the Michigan Mirror column noted that at the Grayling Winter Sports Par, a 95′ professional ski jump was to be ready for 1942. I have found little other information about the jumps; who used them, what contests were held here, when they were destroyed or demolished. 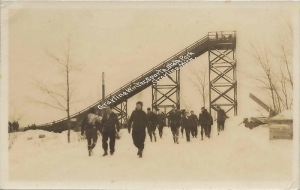 If you have any information about ski jumping in Grayling, please post it or send it via the directions on the About MILSAP page.